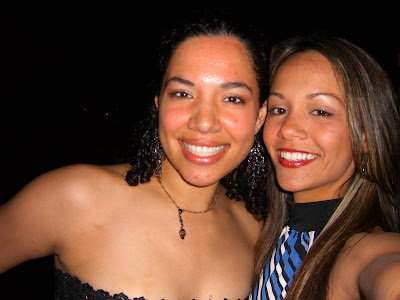 A couple of weeks ago I got a call on the way home from work. It was my ol’ college buddy, Santa. We had a lot of catching up to do and I was floored on how much has gone on since the last time we talked.

I remember the first time she met my Dad they talked and she kept telling him he was a “cool guy!” My Dad loved it and after she left he kept asking me “I’m a cool guy?” He was eating it up every time I told him that of course, he was! It must be the best feeling to be a parent and your kid’s friends think you are cool. On my Father’s urn it even says “In memory of a loving father, grandfather and cool guy”

Friday night we went over to Sevilla’s in Long Beach. The whole night worked out perfectly. See we were delayed a little bit because Santa had to head back home to get her ID. Roommie was supposed to start bouncing at a new club but that fell through, so he called me saying that he was going to be working at Sevilla’s that night and would see about getting us on the VIP list. Half way to Long Beach we get a call from the guys we are following and they wanted to go to JC Fandango in Anaheim instead and right then I get a call from Roommie saying he got me, plus 6 on the list and seeing how it is a $30 cover charge we were ecstatic and off to Long Beach we went! It was a $180 savings! Thanks Roommie (even tho you'll never read this blog!)

The club has two dance floors and a restaurant. When we first walked upstairs I was so happy we didn’t pay the cover because some punk band was on and none of us were feeling it. One of the bouncers told us to rest assure a DJ was coming on in about 15 minutes, so we headed off to the bar and had a round of shots to start the night. The rest of the night continued to be GREAT! I had a blast and so need to be out and having the endorphins rush! Normally, the friends that go out clubbing are the type that only can have fun if everyone is drinking, but the group was all about dancing the night away!

Roommie was keeping an eye on us and making sure no one was causing trouble and intruding on our fun. About 12:30am he came off the stage and passed by and I asked what time it was… it was after midnight... HAPPY BIRTHDAY ROOMMIE!

After the club I headed home and spent the morning with roommie. We went to bed about 7ish and I woke him up about 11:30am with breakfast in bed compliments of IHOP.

I was on cloud 9! Glad you are back in my life girl! And roommie glad we had a drama free weekend!!!
BTW... I wore the corset that I originally bought to wear for Roommie's b-day sex feast out to the club as my top. The pix only show the top lacy part and I am kicking myself now for not taking a full body pix. I love the way it looks with jeans. Oh well, I guess I'll have to wear it out again and take a full body pix and post it later.
Posted by Jane Doe at 10:56 AM

awwww sounds like you had a great time! I haven't been to a dance club in AGES.

I DID! The company was awesome, the music was bumpin' and we stayed until the last dance! Plus, it's a great workout, too! My legs are going to get toned :)

Okay, I'm gonna say the obvious that no one else is gonna say cuz they don't wanna rain on your parade, but that everyone's thinking.

You keep complaining about drama with the roommie and how he's off the deep-end and crossed the line and how he's lost you forever, and then you keep going back and doing stuff like this. If he's confused as to the state of your "relationship," I don't blame him. You're totally giving mixed signals. You blame him for not moving out, but then he moves out and you let him come back and spend the night and celebrate his bday with him. I don't know what you're doing, but I AM frustrated. It just doesn't look like you WANT to move on with your life. You're in that Sensei-T crap of one day you're with him and the next you hate him and the one after that you think you've got a chance.

I'm not saying crap to be a bitch to you. I'm seriously concerned about your physical and mental well-being and more than a bit frustrated with your actions. Sorry if I came off harsh.

OUCH, girl! But what can I say... I am foolishly in love.

You know your sister's thinking the same thing that I am. *sigh*

Only because Cindy said it first but "ditto". Didn't dude bust some walls in your house or something? And you let him back IN??

Cindy - I feel ya! Sometime I use my mind and other times my heart and I am quite confused myself. But it will all clear up soon

Flat Coke - Welcome back! Hope you had a great trrip. And he came back saying his stuff is there and he paid rent until the end of the month so he has a right to be there as much as I do.

Santa - Me too girl! It's good to have you back in my life!

You wore it! Thats cool!
Ur right you should have taken a full body pix! Oh well! :-)
LOL thats was cool going shopping with you to get it :-) LOl Good times!

I wore it with jeans, tho. It looked cute! I am going to buy some more :) Want to come?

Sweet! I'll be there!

You look great in that picture! wow!

But now to the other part.. I have to completely agree with Cindy here. I'm not going to say much more because she already said it so well already, but she speaks the truth. We're all worried for you. You really should be worried for yourself too. This is not a good situation.

Thanks James for the compliment! I need to put it back on and take a full body pix!