Ummm... I wrote this about two weeks ago, but saved it instead of post. oops! But like they say, better late, than never.

Wow... can you believe it's been officially a year since Jay popped the big question and we became officially BF & GF. We moved kinda fast... less then a year into our relationship and we live together, but it didn't seem fast -- Instead more natural. Jay was coming home Saturday from visiting Jayla in Az, so I knew we were going to have a chill anniversary. It was an impromptu trip which prior to the trip, both of us had signed up for The Boot Camp Challenge. 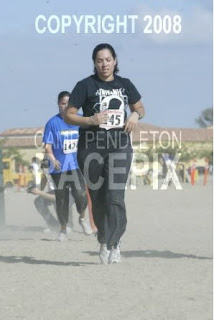 (Don't I look like I am dying???)
The morning of the race I woke up at 3AM!!! Something was telling me to check my phone alarm and good thing I did because it was set for PM not AM. I hadn't decided whether I wanted to do the race yet, but just in case I did, I thought I better set it my alarm correctly. I woke up at 6, which was the time I wanted to leave and decided I better make the 100miles drive to the Marine Recruit Corp Depot.
Once I was there, I was proud that I got myself out of bed and was about to do the race. The race was harder then last year. Maybe it was because I was doing it myself. This years cadence that was over the loud speaker was rifles going off, people yelling and bullets flying... less motivating then the marching cadence from last year. When I got to the 2nd push up station (where the DI don't tell you how many push ups to do) near the end of my three miles and did like 5-7 guy push ups and said F-it and got on my knees. Bug mistake as a DI came to "motivate" me to get off my knees and do my push ups lower. I did like 5 more and just got up and kept running. LOL! I know this a boot camp challenge and I think I failed with that stunt I pulled. Nonetheless, I finished! YAY! I think my time was 42 mins and some change. But if you delete all the wait time, then probably 5 mins or so would be shaved off. :)
Posted by Jane Doe at 6:42 PM 4 comments: