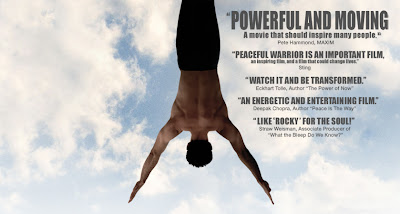 Yesterday, I was bored out of my mind at work and was thinking of stuff to look up on the Internet. I updated my NetFlix movie list and noticed two movies on the waiting list with release dates still pending. One of which was Peaceful Warrior.

I had really enjoyed reading the book and even read the sequel, Sacred Journey of the Peaceful Warrior, so was anxious to see the movie. Plus, I had gone to hear Dan Millman (author of the books) speak at the Mind, Body & Beyond Expo about the book and about living life to it's fullest. I really like the way he thinks and what he has to say.

Since I had tons of time to kill and needed some more things to look up I went on a search to find the DVD release date and to my surprise it was not only back in theaters for a limit time, but also playing at a local one until this Thursday. I was SO excited and quickly texted roommie that there was a showing at 9:40PM and he texted me back “let’s go! Today!” Last summer it was in theaters and we had missed it by one day, but not this time around. I was so excited to have bumped into the theater showing.

I came home around 6ish and was feeling tired from starting the detox and took a nap… a long one. I woke up at 9PM and hurried to get ready and out the door. I called roommie to let him know I was going to be running a little behind schedule and he commented that it was ok and he was just exiting and I was just behind him by a few minutes. I called him when I arrived and he was still driving. I confirmed directions with him and thought he must have passed it. Then as we talked for the second time I realized I gave him incorrect direction. I meant to tell him to take the Imperial exit from the 91 Freeway, but instead told him the Imperial exit from the 57 Freeway. He was like 15 minutes late, so we missed the beginning. Opps!

Besides that little hiccup, the movies experience was GREAT! The main character, Dan, reminded me a lot of my roommie and the character named Socrates reminds me of Sensei-T. I even emailed Sensei-T that Socrates will be his new nickname.
I can recall one of the first life lessons Sensei-T taught me was to enjoy the journey...life's journey that is. Well, in the movie Socrates takes Dan out for a hike. He says that he has been wanting to take him to this special place since the first time they met. Dan was so honored and thrilled that he was gloating for the entire hike. After 3 hours of hiking Socrates tells Dan that they have arrived. Dan asked "did we hike for the view?" as they stand on top of a hill looking at a beautiful sky line. Socrates says no and points to a rock next to Dan's foot. We hiked for that rock, Socrates explained. Dan was upset that he hiked 3 hours for a rock and Socrates apologized to Dan for upsetting him and changing his mood from being happy the entire way to now upset. Socrates was teaching Dan to enjoy life's journey and to be present in that moment. It was a good reminder for me, too!

This is one of those movies that I will actually purchase for my collection. I am not big on buying movies unless I will watch them time and time again.

Oh... and the movie was filmed in Orange County... where I live! And one of the shots was taken in downtown Fullerton where I grew up. This night was filled with koinkidinks!!!
Posted by Jane Doe at 11:08 AM

I haven't heard of that movie. So glad you enjoyed it!!

So are you going to get a kayak to travel alongside our blogger cruise?

I am looking a temporaryly getting fins and becoming a mermaid :)

No silly, I will be authentic and have the shells covering me twins.