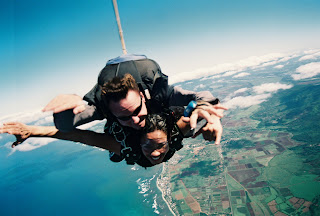 I have this list of things I want to experience before I die and last winter I crossed one of the list . . . I jumped out of a perfectly good airplane!

It was while I was in Hawaii with my jujitsu school. Roomie and I took a van up to the North Shore and took the big plunge. The weather was perfect and overall I would say it was an intense experience. I was the first one the plane to jump, but right before we did my camera guy farted! OMG… it smelled so nasty! He thought it was hilarious, was kind enough to open the side door to let air in, and said it was a “beer fart.” Never heard of a “beer fart” before, but I do know that I NEVER want to smell one again!

Normally, tandem sky diving is done from about 2,000 feet; we went up about 5,000-7,000 feet. I remember when I first leaped out I felt like I passed out for a second or two. Later, I was told that the adrenaline, plus the lack of oxygen at that high of altitude probably did cause me to pass out a little. 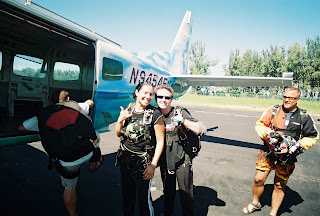 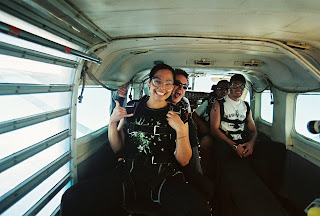 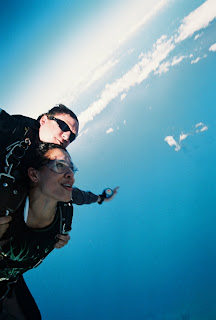 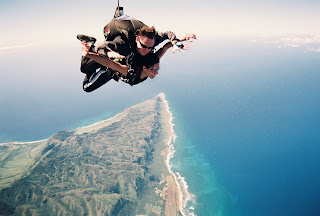 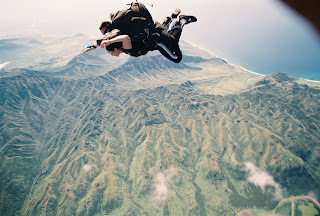 I'm glad I didn't hang out with YOU too much in Hawaii. I don't see myself jumping out of a perfectly good plane. And you know what they say...if at first you don't succeed, then skydiving is not for you.

Wow, that's pretty crazy. I've never felt the need to go skydiving yet. Though I'd rather go skydiving than bungee cord jumping.

how are you getting all these photos scanned?

Cindy, you'd think I'd use my new all-in-on printer, scanner, and whatever else it has machine, but no, I take it over to Walgreens and scan 24 photos for $2.99 :)

I just can't be talked into jumping out of a perfectly good airplane. Once in awhile I think "hey, I should do that"... but right afterwards I think "yeah, that's not so safe..."
Maybe if I found out the world was coming to an end next week, I'd do it. OR if I found out I wasn't going to live much longer...

Jordan.... I love that song! I go through my phases and was on a country kick last week :) Good Taste! Thsi week I am on a 300 soundtrack kick

I met up with the boyfriend at the gym today. I said, "[Kat] posted her skydiving photos!" Boyfriend said, "That's cool!" I said, "It's very cool, considering you'll never see photos like that on MY blog." He said, "Never say never." I said, "Never." He said, "Maybe one day I can convince you to skydive." I said, "Never." And then he admitted that he probably won't skydive either cuz it's too expensive for a couple minutes of thrill. So I'm off the hook.

I love to fly and I love the perks of flying. Sky Mall...iPod tunes...movies...free snacks & drinks...but skydiving??? No thanks!!

Glad you enjoyed it so much. The views below look breathtaking in themselves...

Hey looks like some crazy crazy fun!!! :) Dunno if I'd ever do it though!

Cindy you could always photoshop yourself on my photos and no one would know the diff :)

. . . unless of course you used the same photos I have posted and someone reads this blog. :( But I won't tell anyone

how about I just put my head over your head, and if someone who reads your blog calls me out on it, I'll just say that I have the real photo and YOURS is the photoshopped one. :D

Dude, you are family... what do you mean you never saw these? I brought them on Turkey Day and showed everyone. When I see you next time, I'll show you all 37 of them. Deal?