Friday I planned to leave work 10-15 minutes early to make it home on time to meet a painter who was giving us a quote to paint the outside of our house. Good thing I left a little early because traffic was horrible. Half of my drive is on a toll road which is normally traffic free but last Friday it was backed up. Soon after I got an urgent text from Jay saying Jayla fell at day care and was being sent to the hospital. I know he was probably busy with getting coverage at work, letting people know he needed to leave and getting the details from the day care lady, but not knowing all the details was killing me. Luckily traffic lightened up as if knowing I had an emergency and I was in our side of town in no time. It got a little confusing on where I needed to go as Jayla was still at day care but in the ambulance and originally I was told that she was going to the local hospital, but I had recommended going to the local Kaiser since it was her medical group and didn't know where to go. I got a call from Jay saying he got through to the day care lady and Jayla was on the way to Kaiser. I love having a GPS as it guided me to my destination. 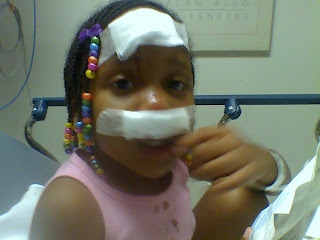 When I got there I was asked my relationship Jayla and knowing there are restriction on who can see patients, I naturally said her step-mom. It didn't feel weird but knew people would get a kick after the matter.
I was whisked about to see the lil tyke who had the ambulance person standing guard at the door. Can you believe she was there all alone? No one from day care had accompanied her on the ride there? I was pissed! (Later we found out the day care assistance leave at 5PM, so the main person couldn't leave because she had 4 other kids that needed to be picked up).
It seems all the nurses and doctor came to see me enter the room and watch Jayla's reaction. She burst into tears when she saw me and everyone reassured me that it was normal for patients to lose it when they see someone they know but they told me she was stellar all the way in and while waiting with no tears. My immediate thought was of course she would cry!! She's a kid who has cuts from her nose and forehead and blood everywhere. We talked about what type of ice cream she was going to have afterwards and that seemed to calm her down and excitement grew when she asked if she could have sprinkles too and I told her of course.
She explained to me that her and her friend were in those play cars pretending to shop. Jayla wanted to sit on top of the car and was unsuccessful. She fell face first on hot cement and broke beads from her hair, had to cuts that later needed stitches and was bruised and burned all over. Poor girl!!
Jay arrive within the hour and then the hospital staff proceeded with mending Jayla. They were going to try to numb and stitch her without knocking her out, but once she lost it with just the shots to numb the area, the doctor decided to give her Katamine (sp?) It was weird to see her on it because she would twitch and not blink. They did the stitching right in front of us, too. It was neat to see, but when I stood up I could see Jayla's face, eyes wide open but her totally out of it, the cloth covering her view from the procedure and the stitching being done and that view made me light headed and I had to sit down. It took her about two hours to come to and then we were on our way home. The next two days were filled with soft foods, spoiling, TLC and Jayla watching all the movies and Noggin she wanted. 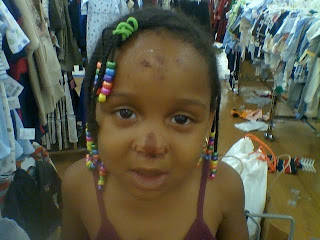 She went back home early with her mom on Sunday and yesterday got most of her stitches out. They couldn't get one of them out, so she has to go back. Talk about traumatic!
Posted by Jane Doe at 9:27 AM

=(
Poor Jayla! But little accidents like this happens all the time with kids. Weren't we just talking about this the other day, about Mr. W and his bros growing up? I'm glad to hear they're flesh wounds and she didn't break her nose or get a concussion.

You're such a blogger, with all your photo documentation. =)

I have to say that each time I read about stuff you're doing involving Jayla, I'm always so impressed at the guardian role you play in her life. She's lucky to have you. Jay chose well. =D

The day care person said "kids wil be kids" in her written statment that she provided. It's true, but why wasn't anyone making sure that Jayla wasn't on top of a play car. I guess it's easy for me to say that because I'm on the other side. It's not her first time in the hospital either. When she was learning to walk she fell and put her handout to break her fall and ended up breaking her arm. She celebrated her 1st b-day with a cast on.

Thanks! I try my hardest with Jayla and give her a home with love, education, fun times and boundaries. It's a hard and not always perfect balance, but I try. I think I chose well with Jay too. We compliment each other very well. :)