Last Thursday I went to Josh’s (Gigi) graduation, he was getting his AA from Cypress College. That was my first Jr. College and is where I met Santa. We were goofing around and as the sun started to set it started to get cool we realized we should have brought a jackets. Santa’s lil nephew wasn’t wearing his sweater, so Santa decided to put it on. 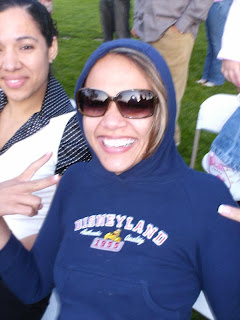 You should have seen when we tried to take it off! She almost lost her nose in the process.
We got lost in a conversation and all of a sudden we hear Gigi’s name being called and us girls jumped up, hooting and hollering so loud that the crowd even looked back at us!

Afterwards we “lei’d” this Hawaiian boy and headed off to Chomps a sushi restaurant in downtown Fullerton. We had a great meal. I had the Sexy Mutha hand roll, sashimi salmon and a cucumber salad. It was not only a great meal, but great company too! There were 10 of us, mixture of friends and family!

No grad night would be complete without a night of partying…or at least an attempt to party! We headed off to Off Campus and thought we would be in for a great treat. Unfortunately, the DJ sucked! He was playing rock and alternative to a hip hop crowd. I have never seen the dance floor so empty and so many people pissed. I even saw some people jump up on the glass of the DJ booth and start yelling at him. The DJ didn’t even do anything. But Gigi was getting his drink on! And afterwards head off to Aarons for 5 more shots!

See…this is why I will never get wasted around Aaron. 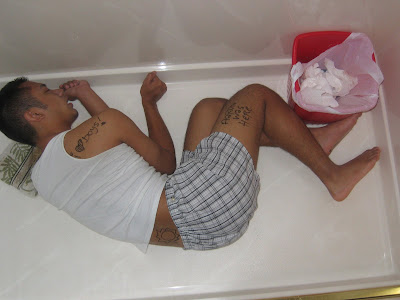 Looks like a good graduation. Hope the hangover wasn't too rough.

How does Josh become Gigi?

Flat Coke... it was a good graduation as long as you were not Josh! Hahaha! But he was good by evening time!

Cindy - I guess that is what his Dad called him... I am not sure how...but I know it came from a story he used to tell or something like that!