So much happened in 2 ½ days…. Weekends are actioned packed lately! Friday I went to dinner with James at Wasabi Sushi in Tustin and it was a great meal!

Saturday morning was one of those mornings where you wake up super early and even though you are poo’d you can’t get back to sleep. My mind probably knew I had a lot to accomplish that day, so wouldn’t allow my body to catch some more z’s. I started to clean out the back part of my car and realized there was a bag that I haven’t taken out for almost a year. It was the one the mortuary gave me after my Dad’s memorial service. I had cards from the flower arrangements people sent, extra thank you cards & programs, the CDs with music we played during his service and other little things from that day. Before when I would bump into his stuff, I would be saddened and depressed, but not this day. I put on the CDs and his top two favorite songs came on:

- “Green, Green Grass of Home” by Tom Jones
- “I can see clearly now” by Everlife

I started to cry… just thinking about the stories that went along with the songs, our trip to Nicaragua, times scuba diving, times camping together, his smile, and when I bought him the Everlife tape for his b-day and he opened my mail and saw it. But it wasn’t a depressing cry or time….it was more like therapeutic one. 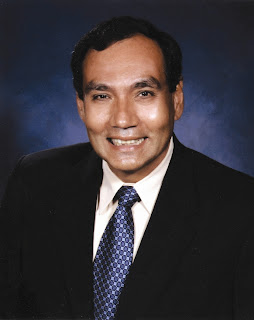 (Isn't my Dad handsome??? This was taken only months before he passed)

Afterwards I went to meet up with my lil sis, Messy Jessy and we went to Balboa Peninsula and took pictures of me doing martial arts and doing some extra filming of me for my lil UTube film! It's always cool to hang out with her and just goof off. 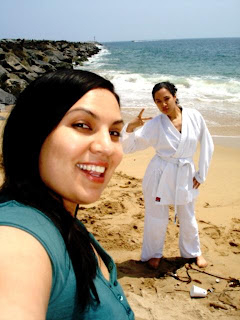 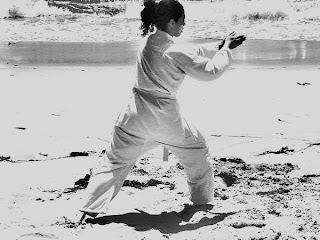 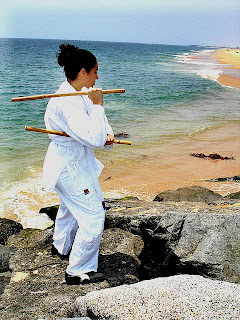 (Me on the peninsula rocks practicing stick fighting with escrima sticks) 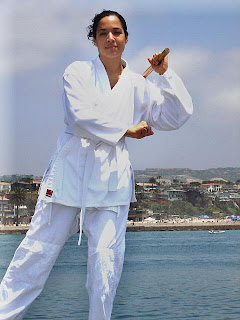 (Me posing with my escrima sticks!) 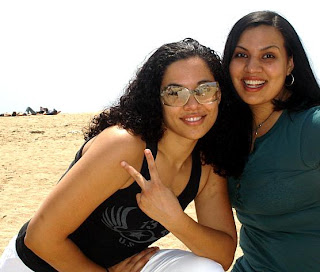 
We headed back to North OC so I could meet up with Sensei T and practiced my form. During practice he had a look on his face and I asked him what it was about. He said he could tell that I have been practicing, because I am doing a lot better and remembering things. Nothing makes a teacher happier then someone actually doing their homework...and in martial arts practicing is equivalent to homework.
We started our applications afterwards now that I have a foundation of most of the basic moves. It was really neat to see the moves in the forms I practice applied in real life scenarios. We went to Ten Ren tea afterwards and then I headed off to get ready for a night of dancing. I am a little dancing machine!
We (Santa, Jay, Paul, Josh, Rocky, Aaron & ME) went to the Mayan in Los Angeles. This is the one with three dance floors! We walked into a great surprise, a salsa competition was being hosted this night and the winner took home $2,500. It was an amazing show!

Afterwards, I headed down to the hip hop room with the gang a danced awhile, until I got a text from Alex asking where I was at. This is the promoter I met at Sutra that has GREAT dance moves! I met up with him and he took me up to the auditorium and was teaching me the basic salsa moves again. It was cool, because we had tons of room and I could hear his instructions. He spun me around like crazy and I was having a blast! thank goodness I didn't have too much to drink, tho, because I was a little dizzy just sober.
Once the dance floor wasn’t so crowded we headed down there for a little bit and that’s were I met my future dance teacher. We sat at a table and watched her for the rest of the night. She is sassy, sexy, and confident and knows her stuff. She totally works the crowd! I love it! Tonight I am going to part take in my first salsa class with her. Wish me luck!
Sunday, I went shopping like a mad women and then hung out with Santa at Irvine Spectrum, we had dinner at PF Changs and then watched Blood Diamond @ her pad with her two cute beagles by . That movie tugged at my heart! I will NEVER buy a conflict-diamond! I told Santa during the movie that I had already cried like three different times and towards the end I started to hear sniffing from her directions. It's sad to think that really goes on!
Posted by Jane Doe at 1:24 PM