Friday night Jay came over and helped me assemble my TV stand. I was hungry, sleep and going delirious! When I get like that I am one big goof ball. But about one 1 AM we completed it! Poor Jay had to be at work that morning at 6am! 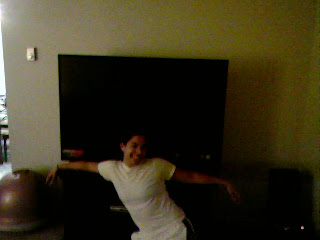 Saturday night we headed down to Jay’s home and had a bonfire! Seeing how Jay lives in San Clemente and drives all the time to North Orange County, the group thought it would be a nice treat for us to visit his area. Josh and I were the first ones there and we guarded the last fire pit as if our lives depended on it. South county beaches are a lot cooler then north county and I was freezing! I made a Starbucks run to get some warm fluids running through our bodies. Go figure the two people that were assigned to bring wood didn’t show up for another 1 ½ - 2 hours. Josh and I sat there on the pit and watched the ocean and talked about life. Pretty soon we saw dolphins jumping out of the water. There were three pods and they were jumping out of the water and displaying quite a show for us! We told all the late folks…. And of course, they were jealous! See it pays to be on time! 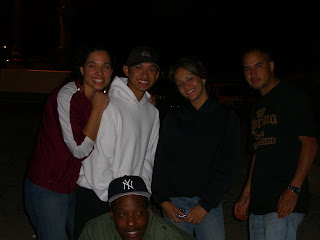 (Left to Right: Me, Josh, Santa, Dennis and Jay (he is on the bottom) 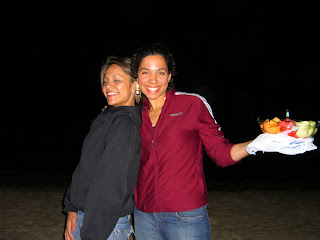 (Santa and me holding the fruit bowl and trying not to have it in the picture. Obviously that didn't work!)

I had made some croissant sandwiches with chicken, pesto sauce, sun dried tomatoes and pine nuts and everyone kept raving about them! *me blushing*

I got a call into the night that Paul and Sensei T were coming down!
NICE! I was so excited I haven’t seen Paul in like forever. 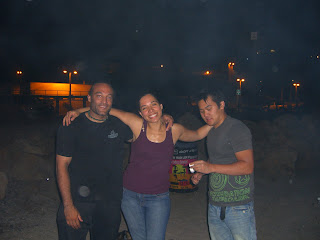 (Left to Right: Sensei T, Me and IT Paul)

The night was filled with tasty food, great company and TONS OF LAUGHTER! 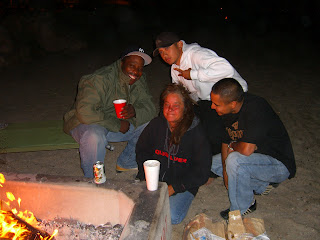 (Left to Right: Jay, Josh, Dennis and homeless women in the middle)

This homeless person kept coming to our pit asking to sit by the fire and for ice. At the end of the night we were taking photos and the guys wanted one with her. Little did we know that her husband was not too far away and got jealous. Oops!
Posted by Jane Doe at 10:22 AM

Looks fun!! It's cool enough for a bonfire this time of year? WOW! I would have never thought that.

I'm jealous about the dophins too!

Look at you guys stirring up trouble for married couples. What if the husband gets so jealous he kicks her out on the street? (okay, that was bad.)

I bet your readers are glad to finally get photos of people they keep reading about!

Summer is the best time of year to have a bonfire! Warm enough to go swimming during the day and cool enough to cuddle up to a warm fire at night!

See.. YOU should move to CA! See what you are missing?

Cindy.... good point... I am going to add captions to photos so everyone knows who is who.. I didn't get to take a pix of Rocky & the other Paul... they were busy taking long walks on the beach and making kissy face!

Ahhh Bonfires!!!!! It's been so long since I've had those. We used to have one every other week back in the day!

James can't we have a bonfire in your backyard in the rock circle?

Yes Kitty I'd LOVE to move to Calif. but I'm afraid I'd be living on the street with the girl in the pic due to the cost of living there vs here. lol

James - You should plan one! Especially when Jordan and Flat COke come to town!

no unfortunately the rock ring in the back yard doesn't have a fire pit :(.

Besides it's not as cool as our beach bonfires. When we did them we piled on so much wood *cough* that it was HOT!!!

We probably had the wood piled up a good 5 feet high at one point and it was a raging fire!

We'll have to plan one when Jordan comes down.