Sunday I went to Tapas Restaurant in Newport Beach to watch my sister’s Flamenco recital.

Flamenco is the traditional song and dance of the Gypsies of Andalucía in southern Spain. It developed over several centuries from Gypsy, Moorish (Arabs), Jews, Andalusian, and other roots.

She had been taking a class for two months and at the end of each semester the school has a recital. Even though it has only been 2 months, she looks like an expert! You would have thought she has been doing A LOT longer!

That dance she was doing is called “Sevillanas.” Sevillanas is a type of folk music, sung and written in Seville (Andalusia) in Spain. Historically, they are a derivative of Castilian folk music, spiced with a bit of Arabic rhythm. Technically, they are an evolution from Castilian seguidillas, they have a relatively limited musical pattern, but rich lyrics, based on country side life, virgins, towns, neighbourhoods, pilgrimage and, of course, love themes. (got that off the web...not my words...haha!)

My sister did an AWESOME job! He was well poised, danced fluidly and wore the spirit of the dance all over her. I loved watching all the different age group and to see a part of my culture. I loved it so much that I am going to take dancing lesson this summer with my niece and Santa and together we are going to learn the Sevillanas. The instructor is Claudia de la Cruz and she even honor us with a dance! 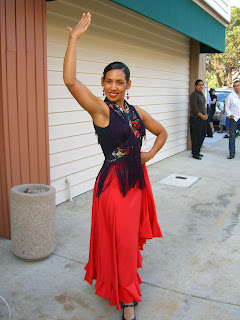 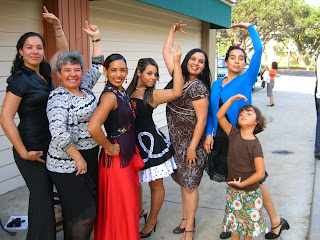 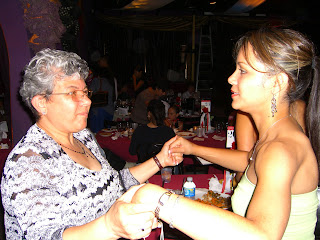 Santa and my Mom dancing salsa at the end. It was too cute! AND...they were being video taped by the cameraman and will be featured at the end of the recital's video when everyone is exiting.
Posted by Jane Doe at 4:45 PM

Dancing is so fun!! And it's like free exercise--you're not thinking the dreaded gym while it's going on!

I totally agree! Dancing is a lot of fun and FREE execrise! I can't wait to take that class, belly dancing and salsa! Soon I will be a diverse dancing machine!

That's really cool! When I saw her at Boot camp I asked her about it. I also asked her how long she had been doing it to be able to give a recital. When she said 3 months I was amazed! :O.

That's pretty cool that you can pick it up so quickly. Looks like Fun!

She is an amazing dancer! It looks like she was born to dance Flamenco!

I´m really surprise!!!!
It´s incredible, you looks like Spanish woman, said to your sister...jaja
I´d like to see her to dance sevillanas.
Congratulations