1 of the reasons I DON'T use a microwave

MICROWAVED WATER – SEE WHAT IT DOES TO PLANTS

Below is a science fair project. I n it she took filtered water and divided it into two parts. The first part she heated to boiling in a pan on the stove, the second part she heated to boiling in the microwave. Then after cooling she used the water to water two identical plants to see if there would be any difference in the growth between the normal boiled water and the water boiled in a microwave. She was thinking that the structure or energy of the water may be compromised by microwave. As it turned out, even she was amazed at the difference. 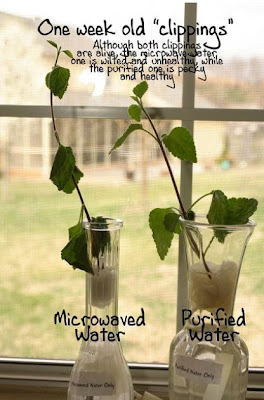 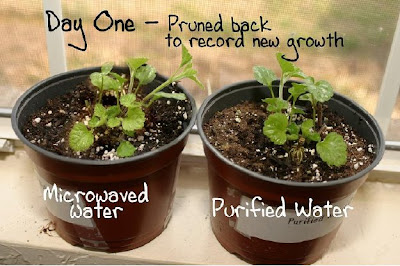 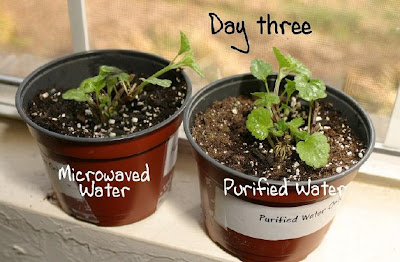 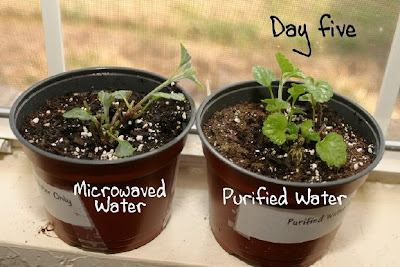 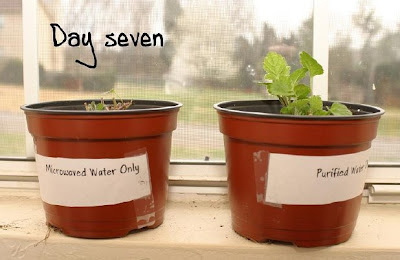 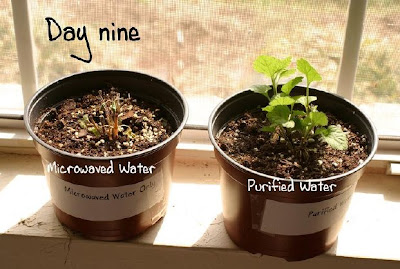 I have known for years that the problem with microwaved anything is not the radiation people used to worry about; it’s how it corrupts the DNA in the food so the body can not recognize it. So the body wraps it in fat cells to protect itself from dead food or it eliminates it fast. Think of all the Mothers heating up milk in these “safe” appliances. What about the nurse in Canada that warmed up blood for a transfusion patient and accidentally killed them when the blood went dead. But the makers say it’s safe. Never mind then, keep using them. Ask your Doctor I am sure they will say it’s safe too. Proof is in the picture of living plants dying. Remember – You are also living. Take care!

Ten Reasons to throw out your Microwave Oven

From the conclusion of the Swiss, Russian and German scientific clinical studies, we can no longer ignore the microwave oven sitting in out kitchens. Based on research, we will conclude this article with the following:
Posted by Jane Doe at 2:17 PM

Your body doesn't "recognize" DNA in food, and water for example doesn't even have DNA. This entire email is a scam.

Another reason to stop believing and forwarding these internet email chain letters. You can't believe everything you read from the internet.

Besides, you can't alter the chemical or molecular makeup of water. Except for turning it into ice or vapor. It's one of the strongest bonds of all the molecules out there.

I still am not a fan of the microwave tho... I will continue to not use it...but intresting that it's not true. Darn me being so gulable