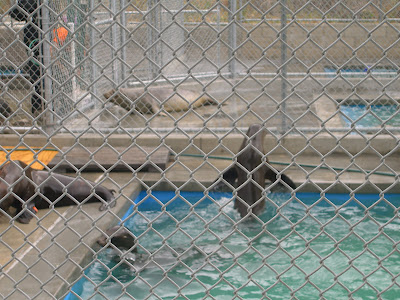 I visited the Marine Center where I want to volunteer at. There is a wait list to volunteer on the weekends and I need to have a negative TB test before being considered, so I had to find one near my work, since the test is given in two parts. The first day is an injection and two days later you have to come back to have it read and make sure there's no reaction. I plan to do it sometime next week. Tons of clinics had the test for over $60. Gesh! But there was one that only cost $30, so I am going there!

The place was a lot smaller then I thought it was going to be, but seemed like a neat place to be and I would learn a lot from all the different cases that come in. There was one seal lion that came in and I saw them administering an IV. It made me think that I need to freshen up on my intravenous injection techniques. When I was doing my vet tech training we practiced with chicken meat, but were can I get syringes now to practice? Maybe I will visit my old school to fresh up.

I'm also signing up to be a part of a rescue team. You might have seen them on TV when Karina struck and they had specials on TV of all the animal rescues. I will have at least three trainings per year and in case of an emergency I can be called out. That one I am super excited about! I have to wait for my TB testing for that one, too. *sigh*

The third place I am submitting an application, is the Santa Ana Zoo. It's near by and I will get to interact with the animal. Oh, and do some dirty work like picking up poo. Ew! But it's all part of the job. 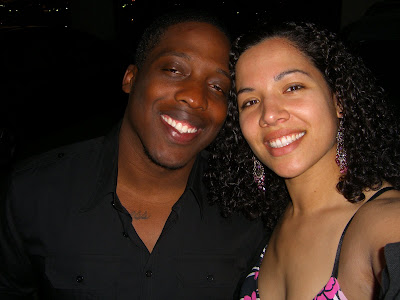 Saturday we went to the Phantom of the Opera and I haven't worn a dress in forever. I felt so pretty and girlie. I really need to learn how to set the timer on my camera and take a picture, cuz there are so many in this pose. They call it the "MySpace pose" 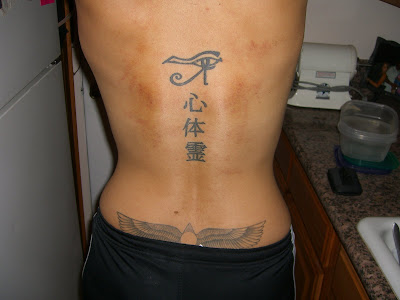 Sunday, I went to work for some OT and decided to treat myself to a massage afterwards. I did my regular steam room visit and mini workout before, as massage therapists have recommended doing so to loosen up the muscles. During the massage, I kept having to tell the guy that his touch was too strong, that certain strokes were painful and kept remaining him the areas where I was sensitive. When it came to my legs he lessen the intensity and it was more comfortable. When I got home I notice my back super sore and even tender to lay on. We I went to take my nightly shower, I noticed I had broken blood vessel all along my back. Three days later and it was still sore, hard to sleep on and the picture above was taken that shows I STILL had those marks! They look like hickeys. I called the manager at Massage Envy and he was a total dick and defended the masseuse, but kept saying "I am not discrediting what you are saying." Then WTF are you doing? Sounds like you are to me! I told him I was willing to come in and show him my back and he said it was not necessary and he apologized for the bad experience. And that was it. This guy had to be joking! I told him that I did not get the benefits of a massage and instead am in more pain then when I went in and would like a refund. His response was "(long pause) oh, that is what you would like?" I felt like saying "yes, dumb ass!", but knew that was not the route to take if I wanted my $$ back, so told him yes and picked a time to collect it.
Yesterday, I had the day off. It felt soooooo good, too! I was able to do some spring cleaning and got rid of a bag of clothes, deep cleaned the bathroom, cleared more space for when Jay moves in, and have 3 doctor appointments. I had a thyroid ultrasound and an uptake of it. I didn't know they give you a pill that is radioactive! Of course the guy told me after I took it. That freaked me out, but he said it was a small dose so they could take clearer pictures of my thyroid. SO I will let you all know how that goes when I get my results.
Posted by Jane Doe at 11:35 AM

yes... tell us how that ultrasound comes out.

well you look so happy vanessa, good to hear your updates!

I want to play at the zoo too!! Except I'd probably spend the entire day with my favorite (giraffes)

I will get the test result in a week or two and hope all is well. My thyroid is enlarge and they are afriard that it is working overtime to produce hormone. I am keeping my fingers crossed that it's nothing, but would rather have to take a pill for the rest of my life then have surgery. My aunt had to have hers removed cuz it had cancer. I was a little worried when he found two little bumps on it. But I will find out in a few weeks, so no point in worrying over it, more then I already have.

And YES, I am VERY happy! Just over a year ago I was going through such drama and life has made a 180!!!

You look too healthy for there to be a thyroid problem.

Haha on the "myspace pose". But I think the most common "myspace pose" is when they hold the camera way up in the air so it's shooting down on themselves and they can show off their cleavage. Seriously, every skanky teenager has poses like that on her myspace.

Thanks! But looks can be deceiving. During on of my physicals my doc noticed that my thyroid was enlarged and ordered all these test and it can back I was borderline and I can remeber whether hypo or hyper, so he recommended that I get yearly blood work and I think it's getting bigger. When I swallow, I always feel a little bit of pressure, so they are doing all the test again. Good thing it's with the same medical group and they can pull my old results from 2004 and compare it. I think I freaked out about it cuz my aunt had thyroid cancer and had to have hers removed and I was doing the stupid thing of "what if.."

Let me know about the ultrasound. Those bruises from the massage are a bit much. I'd want my money back too!!

I know. I have NEVER had a massage end with soreness that lasted DAYS and with broken blood vessels. This guy was out of control!