I had an indoors weekend. What does that mean you ask? I was indoors like a caged animal cleaning like there was no tomorrow. It never surprises me how much crap I have and how much stuff I don't want to part with, but don't use that often. But I need to get rid of, pack, store, sell, move, etc, etc for the big move in date that is less then a month away. Yup, Jay is moving in!
My place is not that big and we both are consolidating our stuff. I naturally have a small pack rat habit that I inherited from my Mom, plus have an emotional attachment to so much stuff. I did make progress tho.
I cleaned out this closet for Jay. It looks small, but I had a lot of stuff packed in it. The stuff in the picture is some of his stuff. 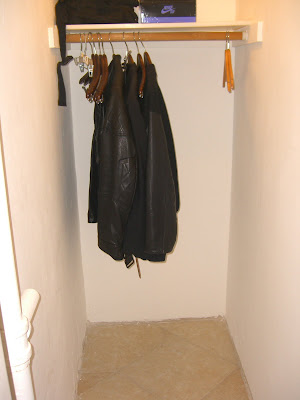 Towards the end I was running out of places to stick stuff. This is the stuff that was homeless, but I eventually found a home for them. 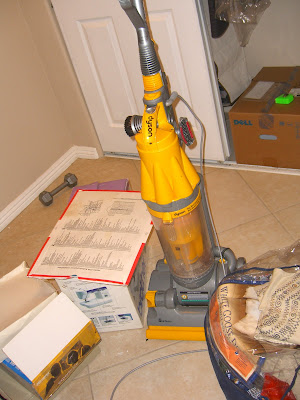 Then there was the pile of stuff I am getting rid of. Yes, I know it's small, but as the day ended it grew a little bigger and I got rid of a big trash bag full of shoes, clothes and accessories. You should have seen Jay's face when he first saw my tiny ironing board. I dry clean most of my stuff, so rarely found a need for an ironing board or a big one for that matter, so I just had the traveling ones. 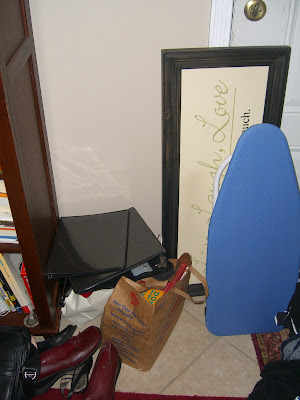 I was proud of the 3 bags of trash I got rid of. There were class materials from years ago that I must have thought I would reference back to and never did. I also have a grocery bag of stuff that needs to be shredded. 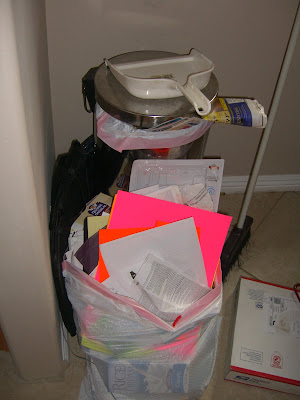 And on to the BIG project... FILING! ICK! I know it looks like a disaster zone! I hadn't filed in about 9 months and had not gone through boxes of random papers for over a year. I cleared out 3 storage boxes. YAY for me! 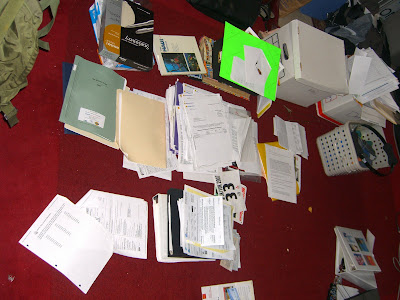 Oh and I cleared out a shelf in the bathroom for Jay. And to think... there is still more to clear out. Maybe this weekend I will go through my closet again and see what more stuff I don't use and could part with.
Don't worry honey, you and your stuff will fit into our place. Hopefully, not just barely!
Posted by Jane Doe at 9:38 AM

Congrats on making Jay room--how sweet. Good luck on living together, I love it!! It's like a slumber party EVERYNIGHT with your best friend there.

Awwwwww! I love the way you put that, "A slumber part EVERYNIGHT." It will be nice to be under one roof. We are going over decorating opinions, where things should go and getting new stuff! Jay is a wizz on Craigslist and is on a hunt for a new table for us. The ones he has shown me are very nice.

DAAAAAAANGGGGG!!!!! Man! You think your bad? See my room! LOL

The day Mom babysat Jayla Jay saw your room. He said Mom tried to close the door, but it opened up and he said he know understands why we call you Messy Jessy! Haha!