I know rodents creep their way into food establishments and places I go. Heck, they have been around since before I was here, but seeing the problem or in this case the trap to catch it doesn’t make me feel too good or understanding of the problem.

I went to pick up some wings for Jay and I and as I was waiting I saw something behind the refreshment refrigerator. It was those plate with sticky stuff on them to trap something. Granted it could be for bugs, but aren’t those traps smaller? And why is it in plain view? What if there was a furry little thing trapped in the goop? It would just be there ALIVE. 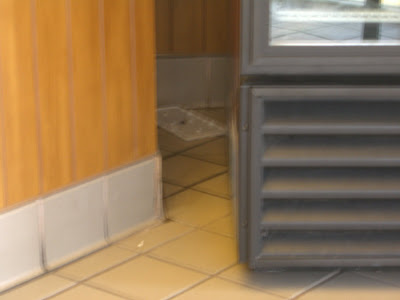 Needless to say, we still ate the wings. 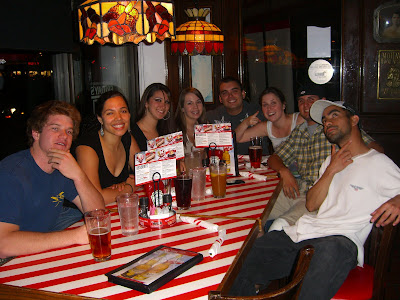 (I just realized that blogger deleted this whole story I typed out earlier, so her's the skinny version)
Yesterday was my chem final and I have never left a final feeling so good! Chem was a 8 hour a week with 3 different classes bitch! The teacher had a very strong accent and we had got into a little disagreement early on, so I dreaded going to class. Last week we had taken a exam and it was from hell, so naturally I thought the final would be coming from there, too. But it was EASY! There was not one question from the previous exam and I only guess on one question. HOORAY for me!
Afterward, a handful of us headed off to TGIFriday’s for drinks, food and good company. It’s sad how people KNOW you are on a diet and keep trying you to eat stuff that is not on your diet. It got quite annoying! It’s not like I was craving anything they were showing me or drooling over it. I was quite happy with my Ahi patties and salad. It’s mostly chicks that do it, guys are cool and don’t even bother you. One guy even told me “I don’t get why skinny girls go on diets” and said I didn’t need to be on one. I thought that was sweet, but unless he wants to by me new clothes to fit in then yes I DO need to be on a diet.

Mostly everyone went to D&B after dinner, but I decide to head over to Jay’s. It was late and I don’t know how to play pool. We did a head count on how many needed chaperons since the D&B doesn’t allow people under 21 in unless they are with someone over 25.

One more final to go! Go figure it’s on my graduation day.
Posted by Jane Doe at 9:00 AM

OMG! We caught 15 mice/rats yesterday! Crazy huh? Somthing is going on in the school! We have no idea where they are coming from. Good thing is that the students are gone for the summer!

It is spring time, so they are mating. Imagine if you bumped into a baby nest! Ew! HEY?!?! Did you get my text??? Santa is in labor! Baby Madison is on her way :)

You're so funny! "Needless to say, we still ate the wings." After you went thru all the trouble to note it, think about it, take a photo of it, and blog about it! HAHAHA!

I think it's cool that your class hung out together. But yeah, women are haters. I'm sure I've blogged about that before. And I was just telling bridemaid Diana earlier in the week about how my (fat) courtroom assistant always buys candy for the courtroom and goes so far as to put it on my desk, giggle, and go away. I don't eat it cuz that action annoys me, but she thinks she's tempting me. You never see her so happy as when my ultra-fit reporter grabs a handful. The courtroom assistant, being the only one among us who doesn't work out, once said, "I hate all y'all for being skinny!"

True, but had I seen a lil furry thing stuck on that trap I think I would have tried to get the wings for free and maybe, yes just maybe eat them.

You're court room assistant sounds like a witch! Like they say, misery loves company and her fat-booty should get a clue. Perhaps you can give her one by dropping a jump rope, free weights or diet pills on her desk, giggle and walk away.