My first days in NY 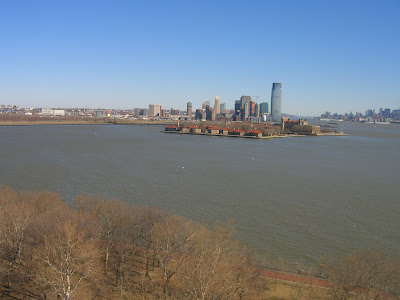 New York is absolutely GREAT! I still can't believe what a great time I had because I have never experienced a vacation like this before. I had no worries or thoughts about home. We got into NY Saturday evening and I was a little nervous that our ride would be late. Last time Jay was in NY his ride was HOURS late, but Lyphe, Jay's best friend, was on time. It was cool to finally meet Lyphe cuz him and Jay talk all the time and have been friends since their childhood. It's rare to keep in touch with people when you move so far away, but they have an incredible bond. Once we got our luggage it was off to the car to meet Lyphe's girlfriend, Crystal. Both of them were so welcoming and were my tour guids as we made our way to Yonkers, where Jay grew up. 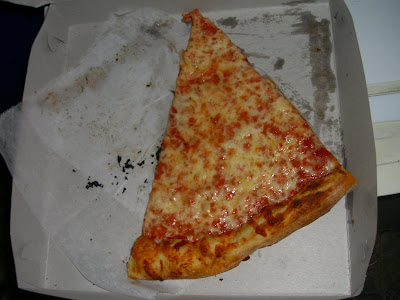 One of the first things we did was have some good ol' New York Pizza from Alfonso's. I had a Sicilian with breaded chicken and this slice was before we headed home. It's weird, I ate the entire slice but didn't feel guilty at all! You can definitely taste the sauce more and the dough isn't so floury, as California pizza.


That night I met Ma' (Jay's Mom) and "AliBop" (Jay's niece). Afterwards, Lyphe, Jay, Crystal and I headed out to a bar in White Plains to meet people from a social group that Lyphe belonged to. I had the best calamari there! The sauce was tangy, yet light. Mmmmm! 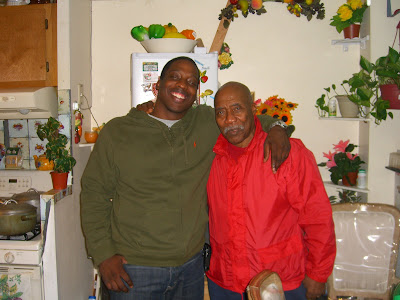 The next day it was off to meet Jay's Dad and step mom, Jenny. Wow, can Jenny cook! She made the best chicken, rice and pigeons peas this side of town (or I guess it would be that side of town). Jay and I tried to recreate the meal last night, but it just wasn't the same! As you can imagine, I did a lot of eating in NY! Roy, Jay's Dad, gave me some Jamaican wine. I must say I am not a fan of wine, but this was so delicious. It didn't have that bitter taste that I am used to. It was sweet and had a kick to it. It was cool hanging with Jay's Dad. There are things he would say that reminded me so much of my Dad, which was comforting.
We made it off to Jay's aunt's house and met more family! 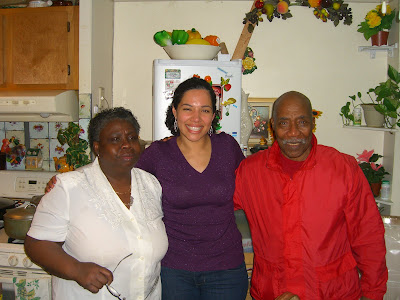 But before we went, I had to have a picture with the family, too! 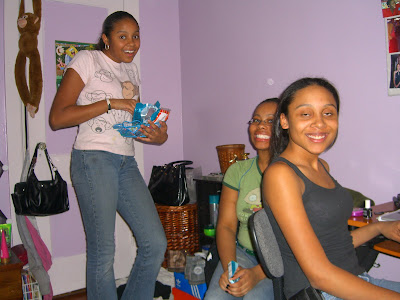 That evening we went to "Squeaky's" (Jay's brother) house and meet more family. Their dog gave us a welcome... he got so comfortable that he passed out and tooted! Man, that dog can clear a room! We decided to walk back to Ma's house and as you can see we were COLD! 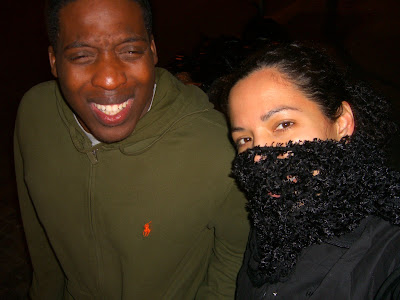 Now, being from the West Coast, we don't have all the same dinning options as the East Coast. Those of you with White Castles in your area might be shock to know that I never have enjoyed one of there burgers until now! 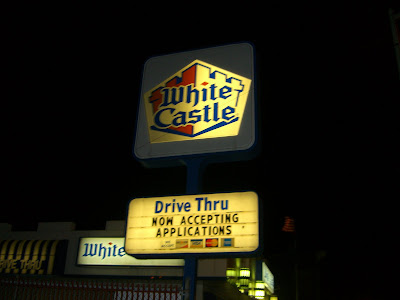 Well, I didn't have a beef one, tho. I had these tiny chicken nugget sandwiches that remind me of KFC's Chicken Littles. 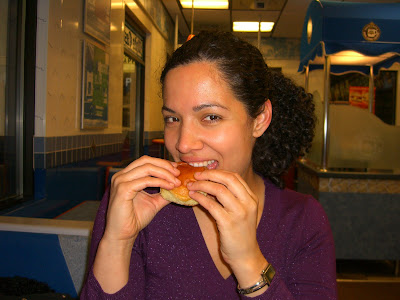 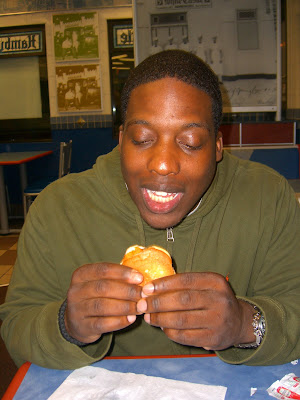 More tomorrow on Statue of Liberty and Ground Zero :)
Posted by Jane Doe at 10:53 AM

Are you a vegan? I can't believe you didn't get a cheeseburger at white castle...but the chicken ones are good too!!

Nope I am not a Vegan, but not a fan of pork, lamb and beef. I raised them and they have a little soft spot in my heart and some are not that healthy, so I just stay away from them. Food is not the same when you have raised it and seen it butcher, ya know? But the chicken nugget sandwich was yummy! I hear that people will get like 20 at a time cuz they are so small.

OMG...NY pizza...*drool* I always announced there is NO pizza as good as good ol' authentic NY, but the Pizz'a Chicago one I had last week may have tied that. Nevertheless, I still drooled just at that photo, like a trained Pavlov's dog.

Now you need to rent "Harold & Kumar Go to Whitecastle."