Catching up with some H.S. buddies 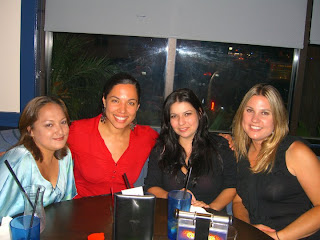 Wow... it's been 12 years since I've seen these gals. It's crazy how much time has passed and to see where people are in there lives. We started off at Chomps Sushi which has to be my favorite sushi place. There tons of great memories there and they have a Sexy Mutha roll that is out of this world!!!

This meet up started through a social networking site where Ruby and I got caught up on the last decade and arranged a meet up. We were supposed to hang out last week but I got called into work, so had to reschedule. I remember going to elementary school with Ruby and our corny teacher Mrs. Unland. We didn't go to the same Jr high, but did meet up again in H.S.

I met Lisa in Jr. High we had some classes together like choir (yes, at one point in my life I actually thought I could hold a tune) and we went off to the same H.S. too.

I am trying to jog my memory about Debbie. She remembered me and gave me a warm embrace, so I will have to search the yearbook and jog that memory of mine. We had great conversations about travels, dreams, goals, men, school, exs and people we have bumped into since H.S. It was a really nice dinner. A common comment during the night was "you look EXACTLY" the same!!" I hope they are talking about my freshman, Sophomore and maybe Jr year and not my senior year because I was a chuck by then. 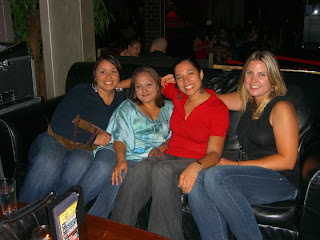 We headed off to an awesome lounge with great ambiance. We talked some more, had drinks and people watched and Erika stopped by. Later on we went to a bar that I have been to before with Jay and Santa. But it was getting late, well I guess not THAT late for a Friday night... 11:30ish. But I did have a long drive to do to get back home, was planning on running the next morning with my sis and had to work the next day AND to top it off a lot of people were smoking in the patio and I don't do well with cig smoke... so I said my good byes. It was a cool night. And I was surprised that I was able to "hang" with only 3 hours of sleep...maybe I am not THAT "old."
Posted by Jane Doe at 2:51 PM