I'm a little stressed out this week. I have a Chem. quiz today, a trig mid-term tomorrow and a Chem. test on Thursday, plus an essay due by tomorrow. Not to mention my sister's wedding is this weekend and as maid-of-honor I have to do a speech, which I have not started on. So to lighten up my day I thought I was post two things that made me chuckle.

This morning while driving to work I heard a traffic report that said "due to sympathy driving" there was congestion on some freeway. Umm... is that what they are calling looky-loo driving now? They are so creative!


Sunday I went to vacuum and Maxwell freaked out, as he always does, when I brought out the vacuum. He ran into the spare bedroom, opened the closet and went in there for safety. When he heard me come into the room he dashed towards the kitchen because he knows he is not supposed to be in the closet. I started vacuuming and heard such a ruckus in the kitchen and went to check it out. I saw him next to my Tara statue, a Buddhist goddess, trying to be all incognito. I looked around and saw that he tried another kitchen counter corner and had knocked all my stuff down. He must have thought I disapproved of him pretending to be to be a statue, so made another mad dash for the kitchen table where he found his next safe spot from the vacuum. 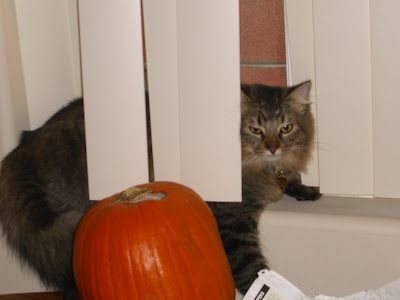 Behind blinds where he stay for the remainer of my vaccumming. If he only knew that I CAN SEE HIM and so can the vaccum, if it had eyes.

And yes that is a Halloween pumpkin that has not been carved, yet. We are a little behind on the holiday spirit.
Posted by Jane Doe at 8:39 AM

oh, I just checked online and I also have two online English quizzes (just took them and got 100% on both) and two short essay analyizing my first essay and a short story. *sigh* This is what I get for procrastinating. Hope you all get good sleep, looks like I will get none tonight. Oh the joys of being a student!

You're taking on a lot w/your new school stuff, but you're doing well. Don't sell yourself short.

Thanks!!! I am taking on a lot, but have a wonderful support system and am doing better this semester with balancing it all. Thanks for the vote of confidence! :)