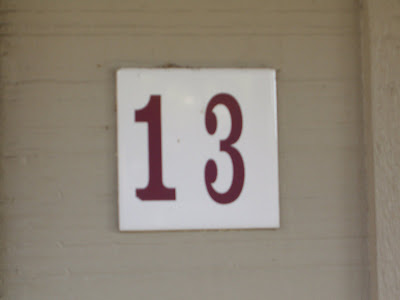 Note: I wrote this a week ago and realized I never posted, so here it is... just a lil late.
Well this weekend was the big move. Goodbye apartment #13 and hello house behind a house or as the refer to it in CA, back house. I am not a fan of the term, but that's the name of it.
Moving was not a smooth sailing process. I got rid of A LOT of stuff. I never realized how much stuff I had duplicates of or never used.
I had a little tiff with my new landlord and can wait until 9 months down the road when Jay and I move in together.
The tiff with my landlord went like this. A lot of miscommunication because I was speaking Spanglish and he interrupted me asking if he had seen my dolly and me accusing him or his family of stealing it. I explained to him that it was probably in the mess of boxes, etc in the house and I just didn't see it. He said it MUST have been one of my friends that stole it because why would someone just come to the back and steal a dolly. I explained over and over that it was probably in the house and I was JUST asking and that the ones that helped me DID NOT steal it. Hello, it was my sister, sensei T and Jay. Why on God's green earth would they steal from me and out of all things a dolly?!?!
He got all bent out of shape over everything after that!
From me not calling 10 days prior, when we had arranged 5 days. Me talking to his wife and her giving me the ok to move in completely on Saturday and her not telling him and him thinking I was moving in on Thursday the 1st and just moving in big things on the weekend. Him being upset because when I saw him (which was Sunday) he hadn't received a rent and deposit check, which had he talked to his wife, he would have known that she told me that they were not going to be home Saturday. She gave me instructions to go ahead a move in, the doors would be unlocked and the keys on the stove, and to give her husband the rent check on Sunday when they rent. ONLY ON FREAKIN DAY LATER! Then I pointed out to him that we scraped the wall moving my fridge in and he lost it yelling :you have to pay for that" over and over. I told him "I know!" I am just showing you so you know and if you want to fix it now you can or later.
Anywho, things are better now.
That Monday following the cable guy was supposed to come and they never showed up. I had taken the day off for them and they never bothered to even call me that they ran over and couldn't make it out. I got a $20 credit on my next bill because of it. My Mom was kind enough to be at my house the following day for their reschedule. She said that's what mother are for. Aw! Good thing she was there, because when the gas company came to turn on the gas they found a leak and she could communicate it to the landlord and I didn't have to talk to him. The landlord sung another tune after that and was so nice to deal with! He was probably feeling bad that he did catch the leak before I moved in. He came home and fixed leak and apologized that I would be out of hot water another day. Yup, that's right, I have been taking cold showers for 4 day and now going on 5 and eating out or making stuff that does not require a stove/oven.
The next day the gas company came out and turned on the gas and all was groovy!
Posted by Jane Doe at 10:20 AM