Were have I been you ask? My work had a mandatory shut down for the week of 4th of July, so I have been on vacay (kindda)!

Last you heard from me was last Friday on Cindy’s birthday, so I will update you from there. That day I came home and wasn’t feeling so well and crashed on my couch from 6pm to 10am the next day. I had a slight intermission from my sleep when I spoke to the b-day girl herself for a little while. I pretty much slept the entire weekend. I was extremely exhausted, had a slight fever, my body ached and my poor throat was super scratchy. I cancelled pretty much everything on my schedule and was a couch potato.

Monday was errand day. I took my car in for an oil change and had the starter changed, went to the dentist for my routine 6th month cleaning and went to the eye doctor for an exam. I know what you are thinking… I am such a GOOD GIRL! *patting me on the back*

Tuesday I woke up early and headed over to Jay’s house for a mini boot camp workout. Even though I want to try and fight off my cold all by myself I thought I better bring in some reinforcement and started a round of antibiotics. Good thing too because I am sure that working out that hard wouldn’t help me on my way to recovery any faster. During our workout Jay’s daughter, Jayla, did a workout on her own..kindda…she is only 18 months, or so. It was the coolest thing to see her hang from the monkey bars all by herself. We ended the workout with 3 sets of bear crawls up a steep hill and some upside down pull-ups. Then we headed over to the local Trader Joe’s and bought fajitas stuff and made a yummy lunch. Actually, Jay made them and I watched as I snacked on grapes and bell peppers. I did the clean up tho!

Afterwards, I head home for a shower and Santa and Melissa came over. We hung out at my house for a little bit and headed off to the Brea Mall. I grew up going to this particular mall and love going there since I know the layout. We did some damage there and one of the items I took home was this cute, white dress. 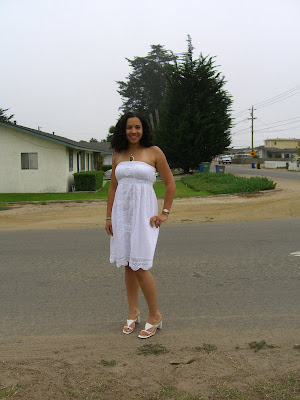 Jay met up with us and we all headed to Lucille’s BBQ Restaurant. It was Jay and Melissa’s first time dining there and they were not let down! Jay had the BBQ chicken sandwich (one of my top two favorite choices) and Melissa had the ribs. They even took home some of the drinking jar mugs as a souvenir.

I called my sister who lives in the central coast of California and invited myself up there. I really wanted to visit and she was glad to have the company. The drive up is on the 101 FWY and it’s along the coast. It’s a beautiful drive and reminded me of high school when we used to make the drive for competitions. I arrived to a warm welcome! My sister, her hubby and their American Bull Dog, Fang greeted me.

In her city all the neighbors have tons of fireworks, so small that you light on the ground and others were like the ones at Disneyland! We went to bed early because Thursday we had to wake up bright and early for a SPA DAY!!!

Thursday we had a massage appointment at Sycamore Spring Spa. An hour before you get your private Jacuzzi filled with mineral spring water. It's hidden away in the forest and had a great relaxing and added a natural feeling to the experience. Afterwards, we went for a hike. My sister had done the hike before and forgot to mention that it was uphill, so half way up I kindly reminded her of that fact, haha!

This is the view from the top of the hill we hiked. 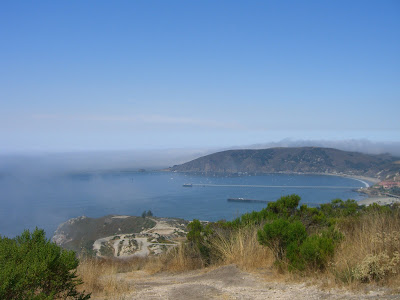 The focal point of the Spa is a Cairn. You can read the sign for more info on what it is. 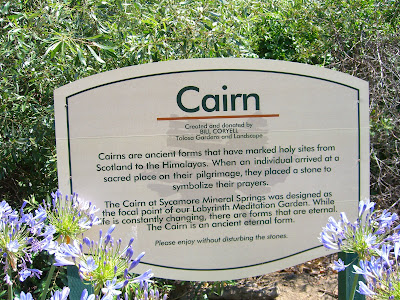 I added a rock on the top as and said a prayer like the sign instructed me to do. Do you see my rock on the very top??? 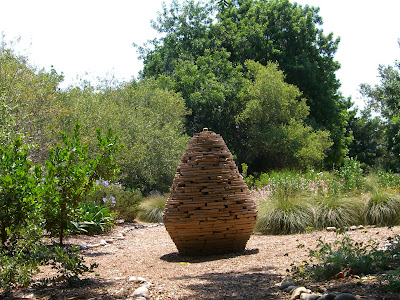 We walked the garden and just pass the Carin was tire swings, so we relived childhood memories as we swung on them. Here is my sister relaxing on one of the tire swings. 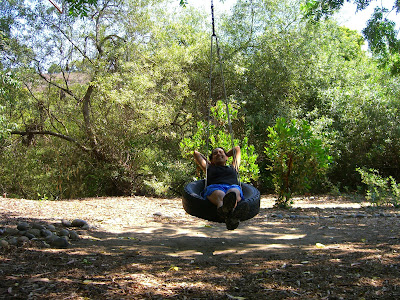 We also did a mediation walk through the rock Labyrinth. You are supposed to walk and see what comes to mind, but we mainly just chatted about life as we walked together. 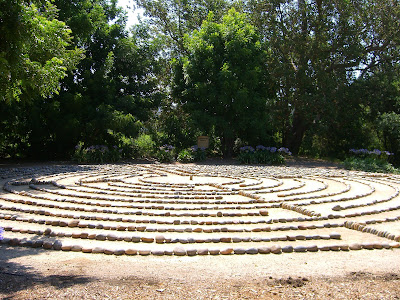 After the spa we went into town and ate at Palazzo Giuseppe where my sister's husband works as the Su Chef. 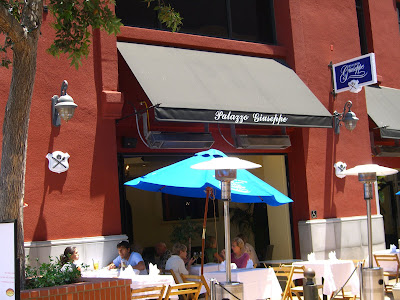 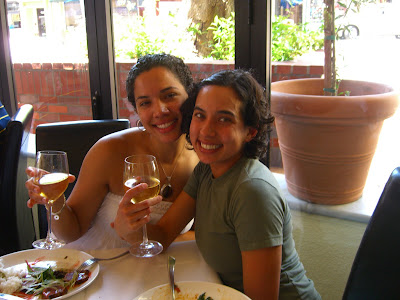 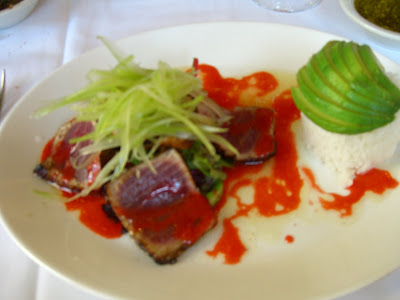 My bro-in-law made me a meal that was not on the menu, delicious Ahi! My favorite! 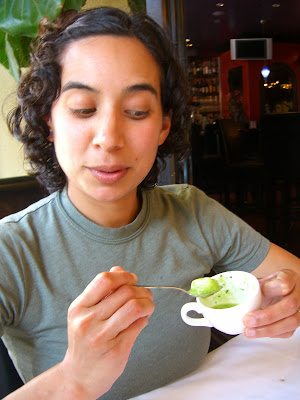 And then we tried a fresh cucumber sorbet.
You know us girls, after a great meal we have to shop! We went to a couple of stores and then headed home.
We carpooled back to Southern California on Friday. Too bad we didn't calculate Friday afternoon traffic. We had quite a drive, but we made it in time for my sister to attend a wedding rehearsal for her friend.
Saturday I headed to work to move my stuff from my old cubicle to my new one. Monday I am supposed to start supporting the Sales Department, so I wanted my home to be ready first thing when I got in. I went to practice martial arts with Sensei T and was surprised to see 5 additional students. Normally it's just us two, but he is expanding. I was able to practice grappling and it felt good to see that I still remembered some moves. Afterwards, I headed off to the gym for workout and soaking in the Jacuzzi and sit in the steam room awhile.
Sunday was my final day of my vacation. I am not looking forward to going back to the grind. I'm really enjoying not working! I can’t wait until I quit and go to school full-time! Sunday I headed off to see my trainer and we worked out for an hour and then she stretched me out for about 45 minutes.I raced off to see Sensei T because our practice would be short today. We went over a new form and I was off again… to get my tattoo!
I must say the first tattoo I ever had done was not painful AT ALL. It was like a massage and at times ticklish. This one on the other had was painful! At one point my big toe went dumb and at another a nerve he was touching made my butt cramp. Or maybe that was from all the tensing I was doing. But here it is…. 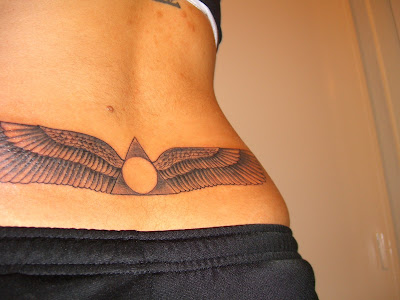 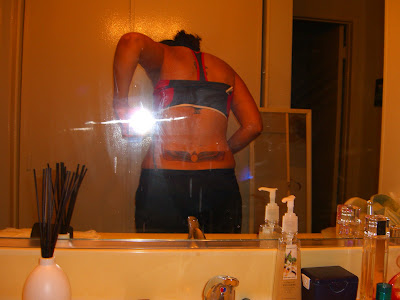 After 8-9 years of thinking of it, I finally got it.

You would think that I would go home and rest after getting this done, but no I went to the 5pm martial arts practice and worked on my martial arts form for about an hour. This time there was three other kids from Saturday’s practice. Sensei T had me demonstrate the Snake Form I learned and later told me to sharper up the form because I would be teaching it to the class when they are done learning the current form they are on now. I was honored! It motivated me to practice, so I came home and started taking notes and learning the names of all the moves, something I probably should have done back when I first learned it.
Posted by Jane Doe at 11:16 AM

Hey Hey Awesome Sweet Sis!!!
You are so Brave I must say!! I LOVE IT!!
It looks wicked sweet!
That is so cool Too that you are going to be doing some martial art Instruction! WOW!
That is impressive!
Sheeez...Now I have to do something cool..Haha
Just kidding
Thank you Thank you so enormously
for the wonderful time
I had a rock-n, super sock-n good time
seriouly I will treasure the memories
of our adventures...Fang says he will treasure the memory of the sweet sent of your a...I mean butt
Hehe miss you already love YOU!!!!

WOW What a busy week!! Glad your 4th was so much fun. The massage place looked so peaceful. Your tat looks painful but it's very unique. Glad you're happy with it.

Wow, busy weekend, and that tattoo is huge! It looks very cool!

Karla - Haha about FANG! I love you and had a sweet time! Thank for all the love! You are doing cool stuff!!! XANGO remember?

Flat Coke - Thanks! It was a peaceful place and it a lot different then the spa places that I am used to. I think I am addicted to them. ANd yes, the tat was VERY painful!!! I wasn't expecting it at all. Especially after my first one being a walk in the park!

James - Yup, it was a busy week and I was glad to have it off so I could go do other stuff other then work! Thanks on the tat compliment. It only took the guy about an hour and half... and I didn't cry! =)


Jessy - Thanks! I love my new dress!!! I felt soooo girlie! I would love for you to take pixs of my tat! Name the day and I am all yours! Unless of course it's during work then I can't...haha! We should visit Ms. Karlita soon...she is going to be moving to CO and then we will not be able to anymore :( *sniff*