It seemed like I was never going to get to Cindy’s birthday party even though the morning of the was extremely productive and I was ahead of schedule. I made breakfast for Jayla and I of pancakes, fruit and turkey bacon, cleaned both bathrooms, and got both of us ready. I made the trip down to my home town to pick up my niece who was going to watch Jayla for Jay and I and that’s when the delays began. I hadn’t accounted for the traffic and sat in it for some time. As I was sitting in bumper to bumper traffic some dip stick hits be from behind. I saw the whole thing as he was looking down and looked up at the last minute to see me in his way. The guy was RETARDED and wasn’t a gentleman at all. After pulling over to the side of the freeway I stuck my hand out waving for him to come to my car. A minute passed and he was still in his car. I climbed to the passenger seat and walked on the side of the freeway, told the guy this was not a safe area and I needed him to come to my car because I had a toddler in my car and did he come out? Nope! Instead he said that there was no damage almost insinuating that we shouldn't exchange info. I told him that he DID have damage to his car and I could find issues with my axle or bumper could fall off after I drove off, so we were definitely going to exchange info. He sent his girlfriend out to take pictures and he said frantically that he didn’t have a pen or paper. The guy was an idiot as I was clearly holding both in my hands. He rummaged through his glove box and mentioned something about his registration. I had to remind him that he needed to give me his insurance card and ID info, not registration! I got his info and he sent his girlfriend to get mine. What a jerk! He never got out of his car once and made the ladies do all the work. I left and was off to pick up my niece who had text me if we were getting lunch. Ugh… more of a delay. She wanted to get her eye brows done too before we headed to my house. Only a teen would need her eye brows treaded to watch a toddler! I dropped her off to get that done while rushing through a drive thru to get the two some grub since it was past lunch time. We finally made it back to my house (60 miles later), gave my niece the low down on local parks, Jayla’s routine, emergency contacts, etc, etc and FINALLY was on my way to Cindy’s b-day bash. 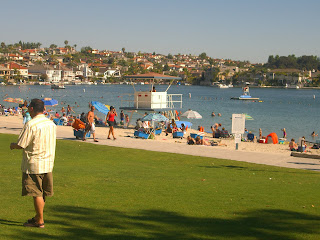 I drove up to the most awesome man-made beach looking lake and got prime parking. By this time it was an hour before the planned trip back to her house and there was a group going out kayaking for one last hooray. This was what I have wanted to do the whole day and made it just in time. It was so beautiful and a great arm and core workout. Four of us went out to the end of the lake and back in less then an hour and Mr. W told us it was a total of 2 miles round trip. Coming back you could see the mountains in the distance and the sky was a beautiful blue. What a great day to have a party. 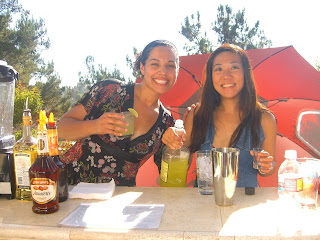 Next it was off to the BBQ and open bar with Cindy as our personal bartender. The bar was filled with liquor and a drink menu with tons of options. I couldn’t help but order the “Panther” as my first drink. As I was waiting for my drink to be made, I tried one of the Jell-o shots. Both were so tasty! Next I tried the “Tootsie Roll” and could feel my cheeks turning pink, so had some ice tea and water the rest of the night. 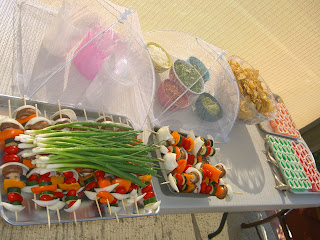 The food was yummy. I must have had 3-4 veggie kabobs and picked on Jay’s plate too. Both of us snacked on grilled chicken with grilled onion slices. It was the first time I had seen someone grill sliced onions and thought what a great idea. There was a dip there with pine nuts on tops at one of the tables that was so good. 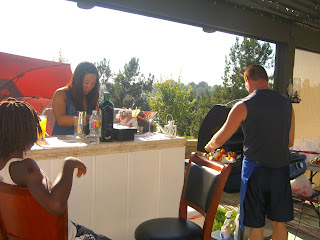 (Here's an action shot of Cindy bartending and Mr. W grilling away!) 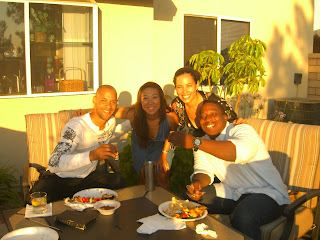 Everyone was super friendly and I had a fantastic time!
Posted by Jane Doe at 10:17 AM

I'm glad you still blog. It's such a great record of stuff. I don't think a lot of people are blogging or reading blogs anymore so I haven't posted as much. Frankly it makes me kinda sad. I value my records.

I didn't know the guy who hit you was such a PUTZ! Did things work out now? Any updates?

I like the record keeping that blogs keep. I have looked back so many times to great memories and photos.

THe guys insurance was retarded! The guy kept giving me the run around, so after a week I went through my insurance and within two days I got a new bumper :)