I have a part time training schedule next week with my replacement; however, my good-bye celebrations happened throughout this week. How awkward for my replacement to have to be there through out it all. I felt bad as people would tell her they have big shoes to fill or the bar has been placed really, really, really high as they raise their arm higher and higher with each word. Wednesday I had flowers delivered from my back up support admin and my team. I also got a sweet card and earrings from my boss's wife saying thank for taking good care of her husband. How sweet is that?

Friday I had a small group of gals (many I barely knew) give me a book with stories of extraordinary women. Only the gals that wrote it in were invited to the breakfast, so later I had people apologize they didn't write in it because they felt it was Merriann's way of saying good bye and they didn't want to spill their hearts out and have others read it and others felt like it was a homework assignment. I totally understood, but I wasn't the planner of my good bye events. Had I been I would have invited the admins and NOT my replacement. Yes, she was invited and wrote in the book. I don't get it, but I can't complain. The gesture was very nice.

The second celebration of the day was at Claim Jumper's for lunch with all the admins from my floor. My boss is a crack up and mentioned that even though he would be leaving early he wanted me to know he was "funding" all the events. What made it even funnier was we had purposely changed the afternoon celebration just so he could join, but hey he got tickets to the UCLA basketball game, so you KNOW he wasn't going to miss that just have good bye cake with me!!! Anywho, I've never been to Claim Jumper's and since it was on someone else's dime, I decided to try something new. I would be bummed if I were paying for it and didn't like it. I got the Citrus Salad and Chicken Tortilla Soup... YUM! The conversations were fun and a lot of reminiscing since three of us started at the same time. I'm going to miss these gals. Tam the most and hope my non-social self makes an effort to keep in touch.

Later that afternoon we had cake with the whole floor where I got well wishes, good bye cards and tons of gift cards. I made out like a bandit -- Target, Carl's Jr, Starbucks, and Visa, MasterCard and American Express gift cards. Shortly after that celebration some of the admins stopped by with more cards and gifts. 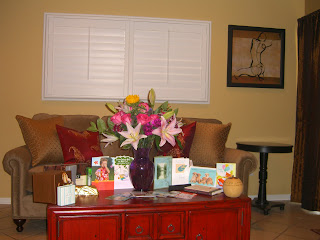 Here's all my loot! (minus a travel bag) :) Which reminds me... our couches came in. 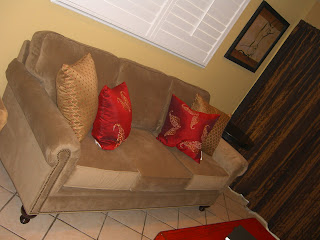 Here's a better picture of the sofa. The love seat is our office, but looks the same.
Posted by Jane Doe at 9:06 AM

wow, your house is looking nice! great eye for decor.
and what do you mean, your non-social self? You're totally social! That's why people love you so much, like everybody you worked with.

sounds like you are loved and will be very missed. that means you'll get glowing references from them when you apply for a future job!

Thanks,,, but Jay should get the credit for al the lovely decor as he spends endless hours online and hitting up stores.

I feel like I am not a social person. Most of my days off I spend at home and rarely do I pick up the phone to call a friend.

I didn't ask for references because we have a strict policy againsit them and during the last lay-off HR reminded all the mangers that we don't do them. I guess I could always ask if I need them later and just not have them on company letter head.

interesting...i've never heard of an anti-reference rule. I wonder why that is.

I think they don't want to be held liable for an employee speaking on behave of a company especially such a big company as that one. I am sure someone sued in the past for giving a reference and the employee was terrible at the new place. Who knows...