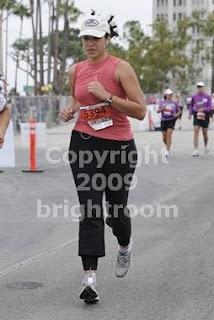 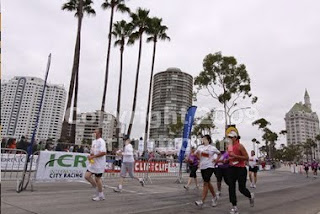 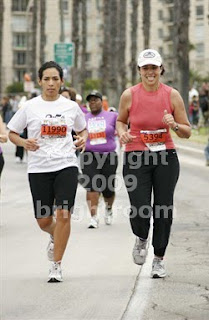 Yup, that last picture speaks volumes about that day. It seemed like something really, really didn't want me to go that day. The night before I set my alarm for 4:00 AM to give me enough time to get up, shower, take my thyroid pill and give the allotted 30 - 60 minutes before eating and drive time. My phone has been acting up and decided not to sync with Verizon's towers and when my alarm went off saying it was 4:00 AM is was actually minutes before 6:00 AM. AHHHH!!!! I only knew this because when I woke up something told me to reboot my phone. Well... Verizon ISN'T the most reliable network after all. Somehow I brushed my teeth, put on my workout out fit, took my thyroid pill and made it to my sister's house in 20 minutes. Yes, I was doing 80mph.
The race waves started at 7:00 AM!!! I ate my apple and finished getting ready on the drive there. My sister said she woke up late too. She was worried when i wasn't there and not picking up the phone because I am normally the on-time type.
We hit the road and weren't the only late ones. As we waited to exit we saw people running in the distance... the race was already under way.
Fearing there would be no parking for this international race we parked at the first parking lot we could find and ran to the race line. By this time I had to use the restroom and we were so excited that it didn't dawn on us how far we were running.
So I found the porta-potties, stood in line and did my business only to find NO TOILET paper. AH! Well, good thing there were toilet seat covers. We were going to run the 1/4 mile to the start line and then start the race, but thought nah and started where the porta potties were. By this time we didn't know it but had ran about a mile to the race and was about 40+ minutes late.
Jay was kind enough to put new songs on my iPod the night before but a mile into the race it stopped playing... 13.1 miles with no music. Ugh! My sister and I chatted and laughed about the days events. I confessed to her that I had only ran up to 8 miles in my training. I could feel my toes hitting my shoes and regret not cutting my toe nails the night before. I had tied my shoes loose because I knew they would swell and didn't want to stop to retie them or cut off my circulation which ended up being a bad mistake.
I ran straight for about 9-10 miles and started to crash. Not eating breakfast had finally gotten to me. Plus I was pushing myself further then I had in training. Around mile 11 there was an aid station were we got a protein drink for fuel. I was happy to finish it, but bumped that it took about 3+ hours (well we think since we were late).
On both feet my toe nail next to my big toe are black and I was SO sore. But I was happy that through every obstacle we made it and finished the race. There nothing I rather do then set a goal and have great company along the way.
Posted by Jane Doe at 3:45 PM

WOW. That's a bad race day. I think the thing that saved it was that you had your sister with you, and I'm so proud of you for pushing through what turned out to be an obstacle course, and for clearing all the hurdles and finishing!

Thanks! It was a crazy day indeed, but I am glad we went out there and did it anyways. At one point my arms were moving faster then my legs. haha! My sister and I were busting up. Another point we were talking about ex's and we were running SO fast and cracked up when we noticed. I was so happy when I saw the finished lined and shocked that I was so sore. Last time I wasn't... I guess every race is different. I want to sign up for another one soon.

Hey, we're going to redo our downstairs. We'd like to enlist your help in the form of Craigs List. I don't know how to do Craigs List stuff. To thank you, you can have first dibs on everything (furniture, decor) we want to Craigs List, for free.

Redoing your downstairs sounds exciting!! I had saw your comment before but when I tried to respond I got an error, but texted jay to email you about Craigslist and how to do it. He uploads the ads, meets the people and all that jazz. I am merely the person who profits from it :) If you haven;t heard from him text him and let me know so I can remind him. Let me know how it goes!! :)