The last 2-3 weeks have been amazing, to see the least! Where should I start???

Saturday, April 18th Jay and I had a busy day ahead of us. We were driving to San Diego for his Marine Corp buddy’s wedding in the afternoon. The drive took us about 2 hours and we had only anticipated an hour and half max. However, we got there right as the bride was walking down the aisle. Talk about good timing. The wedding ceremony was at tops 20 minutes! It seems wedding nowadays are getting shorter and shorter. I had a beautiful new wine colored dress and Jay was wearing a suit with a matching tie. We looked too cute BUT my camera’s memory card had an error and the pictures are lost. We had to skip on the receptions because we had to drive north (about 200 miles) to Los Angeles to see Prince in concert! Yup, Prince in the flesh... woohoo! On the way there we stopped by this cute store and picked up a $900 Pottery Barn table for $250. SCORE! The proceeds go to charity and that’s how we got a great price. The store owner thought we were a couple couple because Jay went out of his way to match his outfit with mind, so she sold took an additional $25 off the table.

Let me say that the concert was AWESOME!!! Jay is the big Prince fan and I’ve always wanted to surprise him with Prince Tickets. It ended up not being a surprise, but still a special evening! Prince was doing three concerts in one night and we were part of it. He was so good and his energy rocked! Funny thing is this guy next to me seems pissed from the beginning and had his arms crossed the whole time. Towards the end I looked over at him because he was the only person sitting down and notice it was because he was sleeping! Who go to a concert to go to sleep? Talk about an expensive nap. Nonetheless, we had a great time.

CO is beautiful! It was snowing and the air was crisp. I was greeted by my sister and brother-in-law at the airport and we made a bee line to dinner. Both of them are vegan, so we had a bunch of stuff of the vegetarian menu at PF Changs. It was so tasty and I was glad that I was open minded about different food otherwise I would have missed out on some fantastic stuff. Her house is up a mountain out of reach of cell phone reception. I was surprised at how easy it was to live without by cell phone. It’s weird to think that we used to call people’s homes and if they weren’t home we would just leave a message and wait until they called back. Nowadays, we can hit up someone with so many methods of communication that you are almost guaranteed to reach them. Maybe it was because my trip was only 4 days, but I didn’t mind it not having my phone.

I was spoiled by home cooked meals! My sister and her hubby make a mean pizza from scratch… yup, the dough, too! The few days I had with them (and their dog Fang) were filled with exploring their small hippie town and neighboring ones, eating at local restaurants, visiting shops, hiking, getting a massage, watching movies, visiting the Denver Art Museum and taking a yoga class.

But soon it was time to be dropped off at the airport and off to my next destination… NC. I left CO in such a Zen mood. OM!

On a side note (and not so Zen like), never make connections through Dallas Fort Worth. Man oh man, do they suck! My first flight had 5 gate changes and was delayed. They have a train that you have to take to get to gates, so it’s not like I need to pick up my stuff and just walk a little ways. On the way back, same story more gate changes!

Here's some photos from my CO trip: 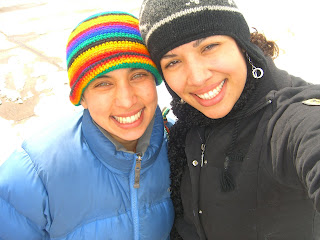 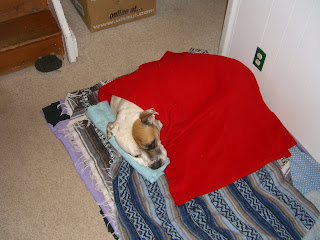 Awww... Fang looks so darn cute!!! His daddy tucked him in for the night. 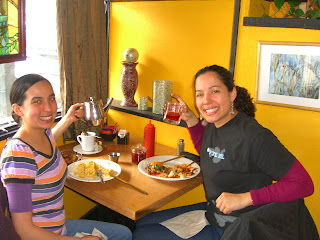 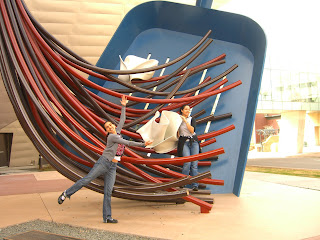 At the Denver Art Museum. We also went to the Psychedelic Experience. That was SO much fun!!! 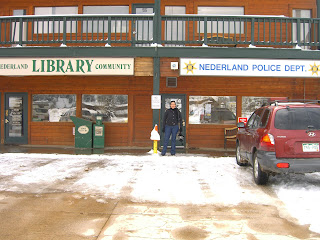 North Carolina was beautiful with tons of tall trees. There we visited Duke (where my bro-in-law goes), visited their gardens, ate some delicious food and took a trip to DC. There was a tornado watch because of the tornadoes that hit TN and SC, so I was a little nervous, but everything was OK.

One of the days we were shopping for mud mask stuff we passed a Petco and walked out with a hamster for my sister. Meet Dahlila… 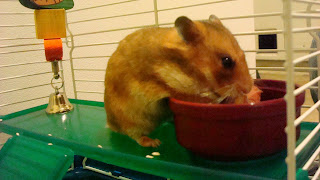 DC was awesome! The drive was more then we had anticipated, but it didn’t ruin the trip. The first thing we wanted to see was the White House. We parked and made a bee line to it, only to see an illegal protest going on regarding Gautama Bay. One of the protesters actually chains his dumb ass to the White House’s front gate. After seeing that, we were off touring our Nation’s capital for 7 hours on foot. Take about a work out! We took a break to quiz each other on the citizenship test book we bought near the Potomac River under the Cherry Blossom trees. It’s was such a good time and funny on the way we tried to stump the other on questions. You had to be there. Because of the weather warning we spend the night in VA in some dumpy Inn because it was the ONLY Inn/Motel/Hotel in town. We woke up the next morning to see tress, grass and three abandon houses in front of Inn and that was it. It looked like a scene straight out of a scary movie.

The funniest moment of the whole trip was asking for egg whites at the Waffle House in NC. Our poor waiter was throw a curve ball when I asked him if I could have egg whites to the point that he left and forgot to take the rest of the orders. He literally came back 4 other times to specifically ask about my egg whites. “Do you want to hold the white part or the yellow?” “Ummm… let me ask the chef if he can do that.” “Ummm… it’s going to be an additional 70 cents, do you still just want the egg whites?” It was too funny!!! 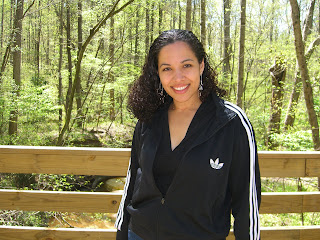 Meet on a hike in NC 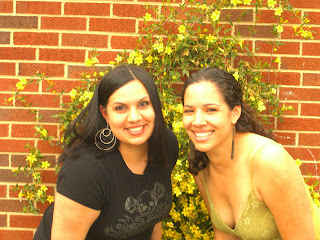 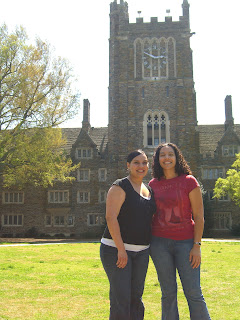 Duke in the background. In building like that there are study hall and random things like a Chick-fil-a 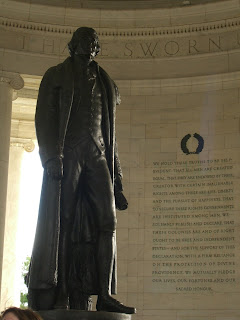 From our visit to DC... Andrew Jackson's monument. My favorite out of all of them. 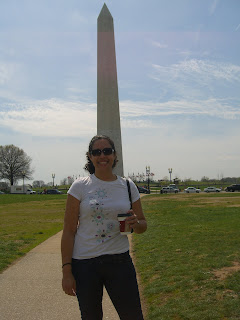 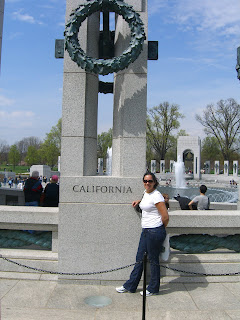 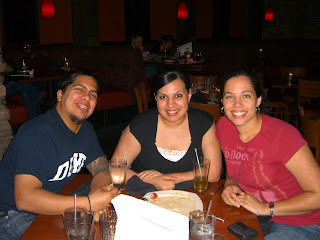 I think this is PF Changs 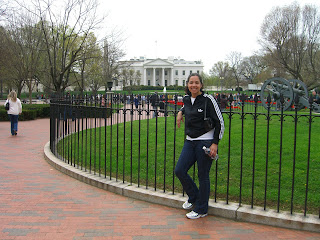 White House in the background. It looks SO small. 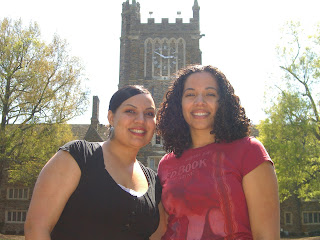 I hate to hear that about Dallas airport--that's where we have a lay over in a week on our way to Vegas. I hope it's not always like that, but it does sound pretty bad with gate changes.

Your trip looks like SO much fun. Aren't the trees here beautiful? You were only one state away from me!! lol

The Waffle House experience was too funny!! My two vegan/vegitarian sisters were asking what in the world would they eat there. haha! I am sure they wouldn't dare ask for egg whites. We were thinking of heading to TN to see Lorranie Hotel, but there were tornado watches and some even hit your state, plue it was double the drive, so we stuck with DC.

The tress are beautiful and we even got to be in DC for the Cherry Blossom Tree season and of course we didn't take pictures of it... we were having too much fun and totally forgot. Oh well... there's always next year.

So many things to comment on I forgot them all. Haha. Lemme think...
1) you look beautiful in your pics
2) I'm bummed there are no pics of you and Jay matching so much that a store gave you an additional discount for cuteness
3) I miss your perky CO sister! I really enjoyed bonding w/her when she visited after your procedure.
4) thanks for the photos of the white house fiasco via cameraphone picture messaging, haha
5) the restaurant should've given you a DISCOUNT for saving them the egg yolks, not charged you extra. hmmph.
6) the "expensive Prince nap"...HAHA!

Okay, that's all I can remember for now.