It's not a real party, unless there is a fight 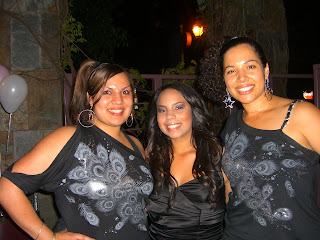 October is always a month of much celebration with three family birthdays and all. This year I had three work birthday's, as well, and Jay's BS graduation to add in on the celebration month. It was a special month with my niece turning the big 1-6. I don't recall my 16th birthday, but I do recall being able to apply for my driving permit. My niece's parents were throwing her a huge birthday day bash and rented out a local community center for the event. It was a dance room that has huge floor length windows that looked directly to the street. There was a candy bowl station that with tons of treats to make your own goodies bag, tons of people, DJ .. and did I forget to mentions 80's themed! These kids were dressed SO cute! Why didn't I have style like that back in the 80's? My sis, Messy Jessy, flew from North Carolina to join in the celebration and we dressed alike for the event. The nite was going great with some little hic-ups. Like the birthday girl having a fit that her friends were not dancing much. Oh and then there was the party crashers. I walked out o the dance room that lead to the outdoor eating area to see a group of teens just looking out on the dance floor. They weren't causing trouble or giving dirty looks, just looking in awe. I invited them in thinking they were my niece's friends and they said they were "scared" to go in. The red flags were immediately raised and soon my niece came out telling the group that they were welcomed in but not her *niece pointing at some chick* because that girl was an unwanted and uninvited guest. I guess the girl talks a lot of trash on all my niece's friends and recently started up the trash talking on my niece. Naturally, my protective aunt-instincts had me keeping an eye on my niece and this group. Good thing too cuz all of a sudden I saw my niece dart out for the parking lot and I literally ran to see what was about to go down. As I turned the corner I saw my nieces dad and that girl yelling at each other. I passed up my niece to hear her dad telling the girl to leave and the girl telling him that my niece was a bitch. OH HELLO NO! I ran up, texted myself the license number of car she was in, told the girl to get the F in her car before I called the cops to escort her little ass out and she sheepishly did. I envisioned throwing the girl across the parking lot jujitsu style. LOL! I seriously did, though. I know... I am like 10 years older, but someone had to get this uninvited guest and her posy the heck out of the party and if she would've swung, I would have happily introduced her to the pavement. The funny thing is Jay had said earlier that evening "it's not a real party unless there is a fight" and jokingly I said I was gonna be in one. Now here I found myself about to. I acted like I was calling the cops and the group left. Boy, I don't miss HS!
The weekend got even more interesting as the next day we celebrated my oldest sis' b-day by going to a play. For some reason we thought it was going to be a comedy, but quickly learned that it wasn't once it started. It was a drama filled play filled with murder, ex-cons, corrupted government, drugs, alcohol and tons of cussing with an ending in the main character and a psychopath falling in love a burning themselves to death for fear of some bugs. It was so far from a comedy!!! But hey, at least we all got to go out together as a family, right?
It was the birthday of my sister who lives in CO on Sunday, so I called her to wish her a Happy B-day and had sent her some gifts throughout the week. It was the big 3-0 for her and I wanted her to have a special one. I tried sending her flowers for that weekend, but she lives in such a small town that neighboring cities do not delivery to her "remote" location and the ONLY florist in town was on vacay for two weeks. Even 1-800flower, proflowers.com and ftd.com wouldn't deliver. Oh well, it's the thought that counts. My sister got a good laugh at my amazement that there was only one flowershop in her city. You just don't hear of that in Souther Cali.
The next weekend was Jay's big graduation day!!! 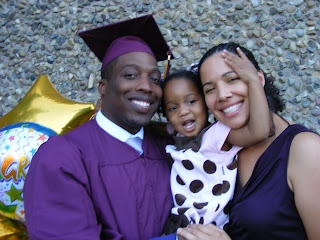 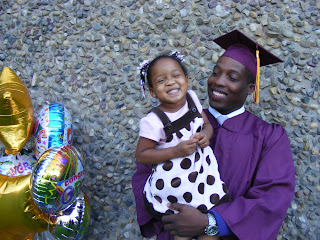 Jayla came down from Az for the festivities :) 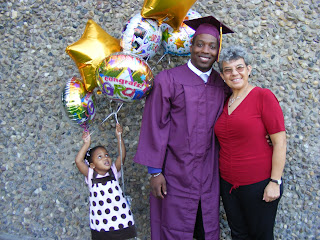 And so did my Mom! 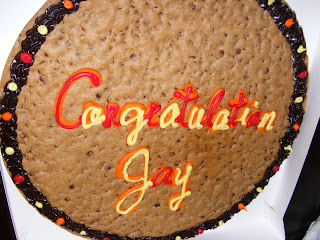 And this was our celebration cookie cake from mrs. Fields...YUMMY!!!

Congrat honey! All those hours of studying, cramming, driving to SD is all over! You did it!! :)
Posted by Jane Doe at 10:57 PM

I don't miss all that high school drama, either. I'm glad you didn't have to call the po-po or drop-kick some punk girl.